Polychlorinated dibenzo-p-dioxins (PCDDs) and polychlorinated dibenzofurans (PCDFs) are considered some of the most toxic chemicals known to man.  We can argue about the apparent toxicity some other time, but personally, I think it might be a little over exaggerated.  Nowadays, it is very difficult to take a soil sample near an urban center and find that the 'dioxin' concentrations in that sample are not below current EPA guidelines, that’s all I am saying.

First thing to note is that PCDDs and PCDFs are not produced intentionally.  They are produced as by-products during a variety of chemical reactions, industrial processes and during combustion.  Anything that involves heat, chlorine and carbon has the potential to form PCDDs and PCDFs.  This includes what is estimated to be the dominant emission source in the USA in 2000 – backyard barrel burning.

While working on cases regarding PCDD/Fs, I realized that many people did not understand the underlying concepts that go with environmental forensics and fingerprinting of PCDD/Fs.  In fact, people were not understanding the data that was supplied by the laboratories for interpreting PCDD/Fs fingerprints in the environment.  Thus, I have started this multi-phased blog to describe PCDD/Fs; what they are, the data from laboratories, levels of fingerprinting that can be done, etc.  To get to the discussion on fingerprints, we we need to start at the beginning…

Part 1, this blog, will cover the very basics, naming and nomenclature for ‘dioxins’.

First off, the proper names are very long (see above as I don’t need to waste more space).  Scientists shorten the names to the acronyms PCDDs and PCDFs.  Layman and most others shorten the names to the terms ‘dioxins’ and ‘furans’.  This is not scientifically correct.  Dioxin is actually a completely different molecule consisting of a single ring structure (see Figure 1).  The correct name that represents the backbone structure of PCDDs is dibenzo-p-dioxin.  Furans are also single ring structures and the correct naming of the PCDF backbone is dibenzofuran.  Another common mistake is the name dioxane, which is similar to dioxin molecules without the double bonds.  See Figure 2 for structures of the different molecules and their names. 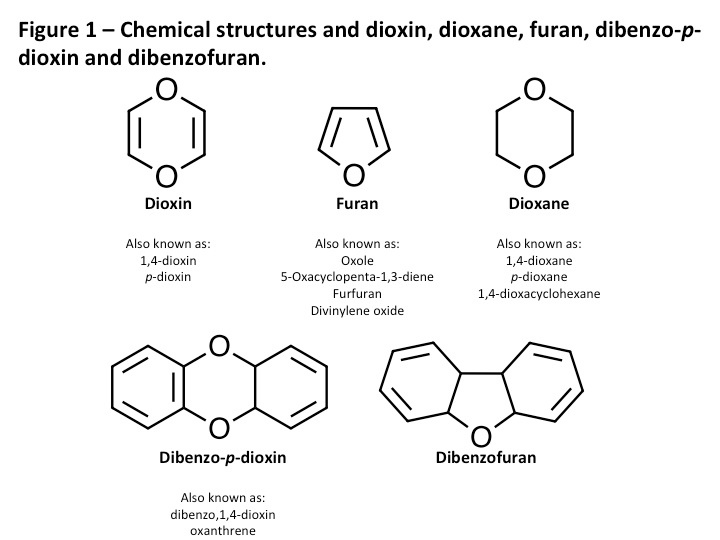 The reason why the naming is important is that many people refer to PCDDs and PCDFs as dioxins and furans, which is incorrect and misleading.  Being somewhat of a purest, I need to stick with the acronyms (PCDD/Fs) and will use throughout the text.

PCDDs and PCDFs, as denoted by the plural “s” are a family of compounds.  PCDDs are based on the dibenzo-p-dioxin molecule backbone while PCDFs are based on the dibenzofuran molecule.  Chlorines can be substituted (added) to these molecules at different positions on the molecule backbones. Adding one to eight chlorine to these molecules results in 75 different variations of the dioxin version and 135 furan versions.  These are called congeners.  In order to identify the different congeners, numbers have been assigned to the different positions of the molecules (see Figure 2). 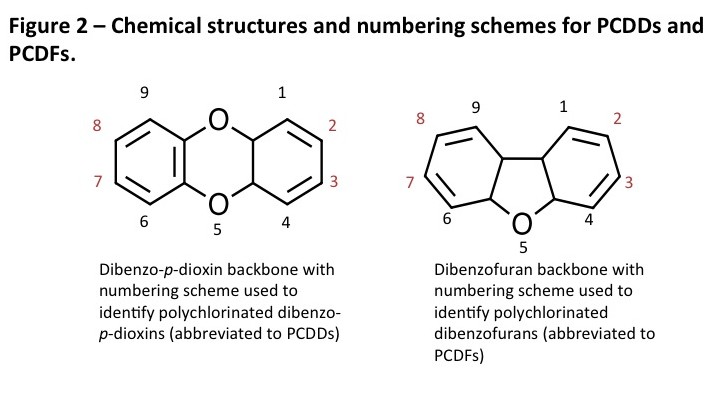 As seen in Figure 2, the 2,3,7,8 positions are marked as a different color to signify their importance that is related to the mechanism of action (and associated with toxicity).  These will be discussed later.

The last point to discuss is the concept of homologues.  Homologues are the groups of PCDDs and PCDFs as grouped by the number of chlorines on the molecules.  Table below shows how each of the homologues has a Greek name to indicate the number of chlorines as well as an abbreviation that is used for shorthand writing of the structures.  For example, a dibenzo-p-dioxin congener with chlorines in the 2,3,7,8 positions would have the full name of 2,3,7,8-tetrachlorodibenzo-p-dioxin, which could also be shortened to 2,3,7,8-TCDD (sometimes the commas are left out two, shortening it to 2378-TCDD).  When eight chlorines are present on the dibenzo-p-dioxin, it is a very long name of 1,2,3,4,6,7,8,9-octachlorodibenzo-p-dioxin, which is somewhat redundant as the chlorines can only go on those locations, so it is simply called OCDD, for short.

There are a limited number of locations where the chlorines can go to make different structural congeners.  The table below summarizes the names, abbreviations and number of congeners in each homologue.

How Accurate Are Your Lab Results, Really? – Get the best data for your litigation case