This month, our team at Chemistry Matters Inc. were able to share some of our knowledge through a peer reviewed publication that was published in a scientific journal called Forensics International.  The paper describes the use of comprehensive two-dimensional chromatography (GCxGC) for fire debris samples.  The paper title (and link) is: The application of comprehensive two-dimensional gas chromatography to the analysis of wildfire debris for ignitable liquid residue (ILR).

Although the paper focuses on arsonous wildfires and fire debris from these investigations, reasons for application to residential or commercial fires are the same.   For another blog on what type of container to use for fire debris collection, click here.

Matrix - The Enemy in ILR Analysis of Fire Debris Samples

Fire debris samples contain a complex mixture of materials that can release chemicals during the extraction process, generically referred to as matrix.  Most debris samples have chemicals naturally present in them that would potentially interfere with the detection of ignitable liquid residue (ILR) detection.  Then, to complicate things further, that debris is burnt or at least partially burnt which provides a whole bunch more potential chemicals (combustion by-products) that can interfere with ILR detection.    For wildfire debris (this includes bushfires), we have percentage quantities of matrix chemicals (plant, soil and organic material) and combustion by-products present in the fire debris sample and the goal is to detect parts per million or lower concentrations of ILR in those samples.  That is a lot of noise (matrix) masking very low concentrations of signal (ILR).  This is a common pitfall of routine ILR analysis using GC-MS.  The high amounts of matrix ‘noise’ hides the low concentrations of ILR that might be present in the sample.  To avoid this issue, the technique of comprehensive two-dimensional gas chromatography (GCxGC) coupled with time of flight mass spectrometry (TOFMS) can be employed.

Top Three Reasons GCxGC should be used for ILR analysis

From our research and what is known in the scientific literature, here are the top three reasons GCxGC should be used for ILR analysis in suspected arson investigations.

Natural compounds and their combustion by-products produce thousands of potential interference chemicals that can hide the presence of ILR marker compounds used to determine if ILR is present in a sample or not.  A reference sample does not help in these instances.  It will simply show you that there are a lot of things interfering with the ILR identification.  We need to see behind or around these interferences, not just know that they are there.  These interferences are also present in percentage quantities.  ILR is usually present in parts per million concentrations or less.  Therefore, the most effective way of identifying the ILR is to move the interferences out of the way, which can be done using the GCxGC chromatography.

As shown in the figure below, very large interferences can be seen in front of our actual targeted compounds, in this instance, the castle group of compounds.  The peaks are very large (high in concentration) as seen by some of their odd-looking peak shapes.  Since we use mass spectrometry, we can identify what these interferences are based on the library match to online databases.  The identity of the interferences is not a revelation since these compounds identified in the figure are very common natural products in plant material.

The combination of GCxGC with TOFMS can have a two-fold impact on sensitivity.  The GCxGC can focus our peaks more which gives a better signal or response.  The TOFMS provides lower detection limits as it is more sensitive than a regular benchtop mass spectrometer.    A graphic below shows a burn test with gasoline and woodchips where we were able to detect the gasoline by GCxGC analysis even with 6 minutes of burn time.  The comparative regular GC-MS analysis chromatograms are also shown for comparison.

Sensitivity was recently examined by researchers at the University of Alberta who were looking at how sensitive an accelerant canine detection unit was.  What they found was the dog was capable of outwitting even a GCxGC-TOFMS and was able to detect 5 picoliters of gasoline (that is 5x10-9 mL for those that are wondering).  Their work was published in Forensic Chemistry and is titled: A Novel Protocol for Producing Low-Abundance Targets to Characterize the Sensitivity Limits of Ignitable Liquid Detection Canines. 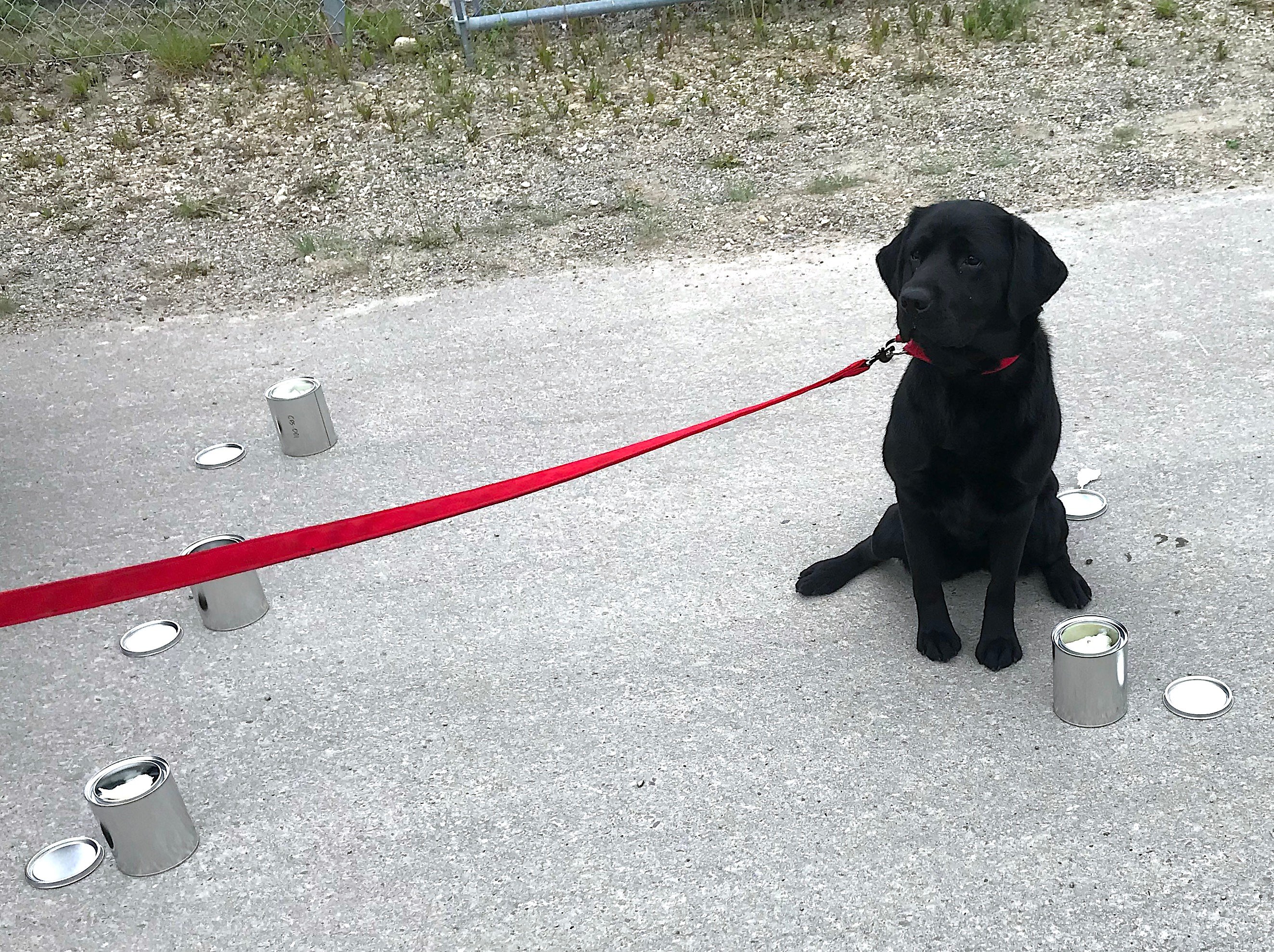 The fire debris samples received by the laboratory for ILR analysis are positive biased.  This means that either a human or a canine detection unit (CDU) or both have indicated that ILR is suspected in the sample and sent in that sample for analysis.  The CDU probably got help from the human to actually physically collect the sample.  Therefore, you would expect most samples should come back with results with ILR being present.  Since we began using GCxGC-TOFMS for our ILR analysis for wildfire debris, our rate of detection of ILR has increased substantially.  Using the regular GC-MS method, our rate of detection in our suspected positive samples was around 50%.  Since GCxGC-TOFMS was routinely applied to our samples, our rate of detection has increased to over 80% in the last three years. 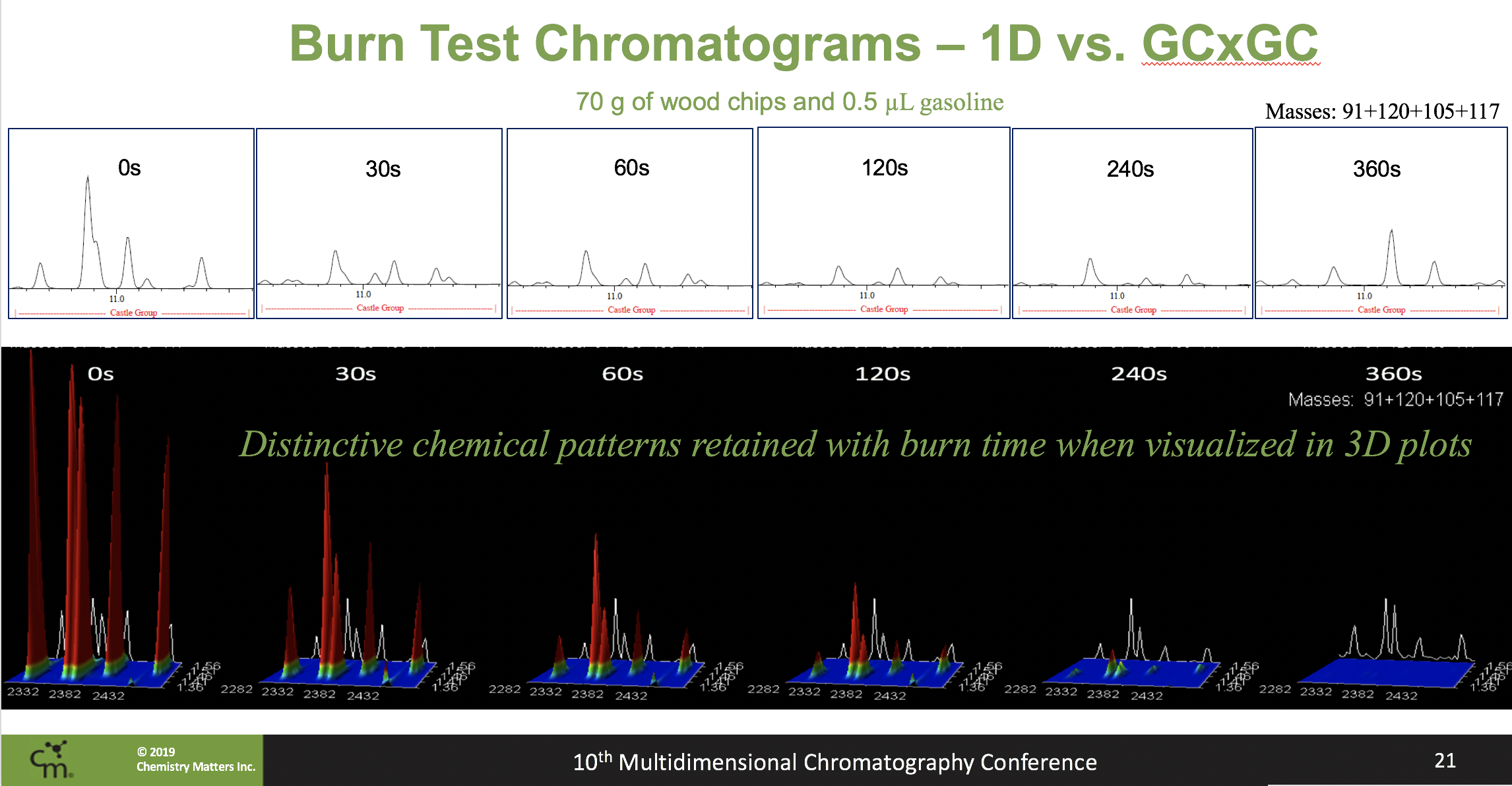 If you are working on arson investigations and you seem to not be getting the positive results you would expect, you should think about using GCxGC for your fire debris samples.  Our experience with both structural fires and wildfires shows that this is applicable to both scenarios but is especially true for wildfire debris samples.

If you are interested in reading more about GCxGC use on wildfire investigations as well as seeing a slideshare presentation on the topic, click here.

Contact us with any questions you may have on our paper and if you might be interested to see how our approach can be applied to your arson investigation. 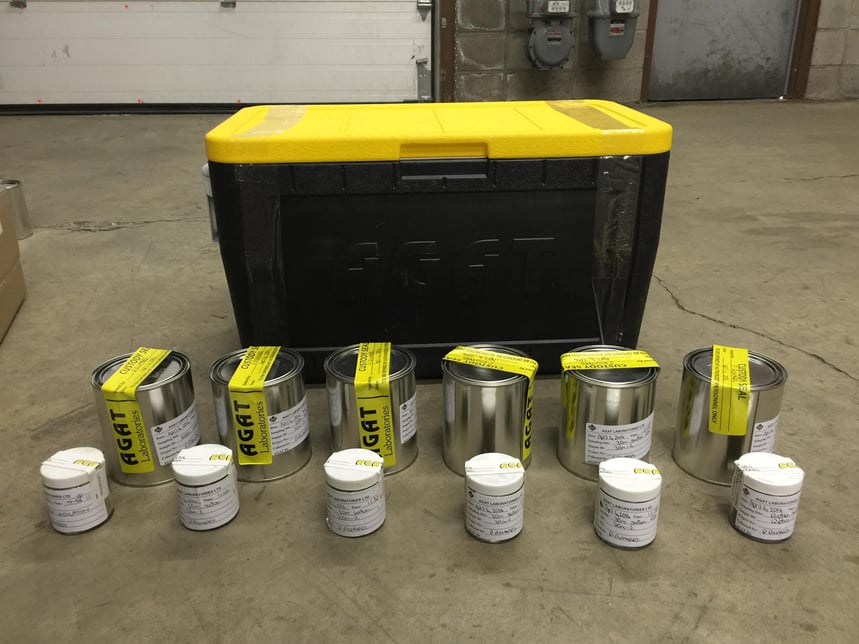 Make sure your investigation has legal chain of custody

Don’t let matrix get in your way Matrix is your enemy – in fire debris collection for arson investigations